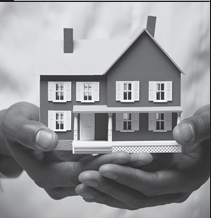 To understand what insurance is and how it works, you must first under-stand something about risk. Risk means the same thing in insurance that it does in everyday language.

Now notice that risk is not the loss itself but the uncertainty of loss.

There are some losses that are certain to occur eventually, such as when a rug finally wears out after years of use or a car runs out of gas. Such losses are not risks because they represent a certainty, instead of an uncertainty, of loss.

Another term that means almost the same thing as risk is exposure. An exposure is a condition or situation that presents a possibility of loss. For example, a home that is built on a flood plain is exposed to the possibility of flood damage.

We spend our entire lives coping with risk: crossing the street, going swimming, buying a new house, traveling by plane. These risks sometimes result in small losses, such as a stubbed toe or a lost pocket comb, that we accept as a normal part of life.

People have developed several different methods for managing the risk of serious financial loss. One method is simply to avoid risk.

For example, you can avoid the risk of being in an auto collision by never getting into a car.

But it isn’t practical to avoid all risks. Fortunately, that isn’t the only method of managing risk. You can also control risk to some extent.

For example, training workers in the safe use of welding tools can curtail the frequency of fires on the job.

Risk control techniques that curtail loss frequency come under the heading of loss prevention. Or, installing a sprinkler system in a factory won’t prevent a fire from occurring, but it will limit the severity of any fire that does occur.

In some cases, people simply retain a risk. That is, if any loss occurs, they will pay for it themselves. Sometimes people retain only a portion of a risk— the portion that remains after other means of managing the risk have been employed.

The final method of managing risk is to transfer it. This option includes, but is not limited to, insurance. For example, a hold harmless agreement may shift liability from an owner or contractor to a tenant or subcontractor. (A hold harmless agreement is a contractual arrangement where one party assumes the liability of a situation and relieves the other party of responsibility).

However, for many risks, the best way to transfer them is through insurance.