The elements of a legally valid contract 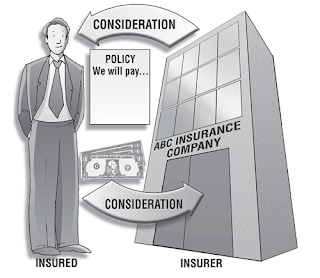 Elements OF A valid Contract

Now that you’re familiar with some of the principles of insurance,,

You’re probably familiar with the term contract. A contract is a legal agreement between two competent parties that promises a certain performance in exchange for a certain consideration.

When an insurance company agrees to pay for an insured’s losses in exchange for a certain premium, the two parties have entered into a contract.

Although a contract of insurance may be oral, it is usually written in  the form of an insurance policy.

characteristics to be legally  enforceable.

consideration  offer and acceptance (agreement) and

A contract is not valid unless it is made between two parties who are considered competent under the law. In most cases, a person who is a minor, insane, or under the influence of alcohol or drugs is considered incompetent.

The second requirement for a valid contract is that it be formed for a legal purpose. A contract that is against public policy (offensive to the best inter- ests of the public) or in violation of the law is not enforceable.

The third element of a valid contract, offer and acceptance, means that the contract involves two parties: one who makes an offer and one who accepts it. This is also called agreement. An offer is a promise that requires an act or another promise in exchange. Acceptance occurs when the other party agrees to the offer or does what was proposed in the offer.