Characteristics OF an Insurance Contract 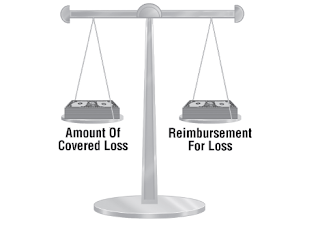 In addition to the characteristics an insurance contract shares with other valid contracts, it also has some special features of its own.

One of the most important characteristics of an insurance contract is that it is a contract of indemnity. The principle of indemnity states that when a loss occurs, an individual should be restored to the approximate financial condition he was in before the loss, no more and no less.

■    The insured bought an automobile four years ago for $15,000. Today it is worth $6,000. According to the principle of indemnity, the insured should receive no more than $6,000 if the car is demolished.

■         You lend your laptop computer to a friend, and it is destroyed in a fire at your friend’s house.

Your friend offers to pay for the computer. You also have insurance that would cover the loss.

According to the principle of indemnity, you should not be able to collect the full amount of this loss from both your friend and the insurance company.

The principle of indemnity is closely related to both the requirement of an insurable interest and the exclusion of speculative risks that we discussed earlier.

An insurance contract does not insure property; it insures the person who owns the property. This means it is a personal contract.

An insurance contract is aleatory, which means it is contingent on an uncertain event (a loss) that provides for unequal transfer of value between the parties.

An insured can pay premiums for many years without having a covered loss.

On the other hand, insureds who suffer a loss often get a great deal more from the insurance company than they’ve paid in premiums.

When we say that insurance contracts are adhesion contracts, we mean that one party has greater power over the other party in drafting the contract.

Although the insured may request special provisions or coverages, it is the insurance company that ultimately draws up and issues the policy.

A problem that sometimes arises in insurance contracts is ambiguity, which occurs when the insurer doesn’t make the terms and agreements of the policy perfectly clear.

Since an insurance policy is an adhesion contract, the courts usually resolve any ambiguity in policy wording in favor of the insured.

When doing so, the courts may rely on the doctrine of reasonable expecta- tions, which states that a policy includes coverages that an average person would reasonably expect it to include, regardless of what the policy actually provides.

An insurance policy is a unilateral contract. Unilateral means one sided.

An insurance policy is one sided because only the insurance company is legally bound to perform its part of the agreement.

If an insured pays a premium and a loss occurs, the insurer is legally bound to pay for the loss under the terms of the policy.

However, insureds are not legally obligated to pay premiums. If insureds stop paying premiums, the insurance company can cancel coverage, but it can’t take them to court for breaking the contract.

On the other hand,

if an insured fails to comply with conditions and duties specified in the con- tract, the insurance company may deny an insured’s claim.

Another characteristic of an insurance contract is that it is a contract of utmost good faith. The insurance company relies on the truthfulness and integrity of the applicant when issuing a policy. In return, the insured relies on the company’s promise and ability to provide coverage and pay claims.

An insurance policy includes a number of conditions that both the insured and the insurer must comply with.

For example, if a covered loss occurs, the insured must notify the insurer about the loss, and the insurer must use the valuation methods specified in the policy to settle the loss.

For this reason, an insurance policy is a conditional contract.