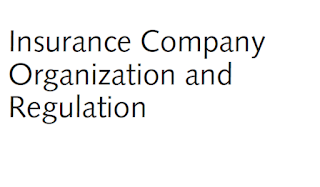 Now that we’ve talked about the insurance contract in general, we want to look more closely at the organizations that issue these contracts.

There are several types of insurance companies that represent different ways in which companies raise the money necessary to begin business and enroll their pros- pects for insurance.

The first type is called a stock company.

When a stock company first forms, it sells stock to stockholders to raise the money necessary to operate the business.

The company is in the business to sell insurance to the insured. Profits attributed to the operation of the company are returned as dividends to the stockholders, not the insureds.

The second type, a mutual insurance company, functions differently than a stock company.

As a result, they are required to set money aside in a reserve in case their claims experience is higher than expected.

Assessment mutuals charge members a pro rata share of losses at the end of each policy period.

The third form of company organization, although not as common as a stock or mutual, is known as a reciprocal company.

The word reciprocate means “to give and take.” A member of a reciprocal agrees to share the insurance responsibilities with all other members of the unincorporated group.

In a sense, all members insure each other and share the losses with each other.

A reciprocal is managed by an attorney-in-fact who is empowered to handle all of the business of the reciprocal.

Another type of insuring organization is called a Lloyd’s Association.

Perhaps you have heard of Lloyd’s of London.

There are also a limited number of Lloyd’s Associations in the United States.

Another type of insuring organization is a fraternal benefit society.

A fraternal benefit society is an incorporated society or order, without capital stock, that is operated on the lodge system and conducted solely for the ben- efit of its members and their beneficiaries and not for profit. Fraternals offer insurance that is available only to their members. Most write only life and health insurance.

In 1981, Congress passed the Liability Risk Retention Act to give product manufacturers more options when insuring against product liability.

The act accomplished this by limiting the states’ authority to regulate product liability insurance. Risk retention groups and purchasing groups are regulated in the states where they are domiciled, but they can transact business in all other states.

This exempts them from state insurance regulation and guaranty funds.

The Liability Risk Retention Act of 1986 amended the 1981 act by giving the right to form RRGs and PGs to nearly all businesses. They are prohibited from writing workers’ compensation and personal lines insurance.

Some companies and individuals choose to self-insure.

With this option, part or all of the risk of loss is borne without the benefit of insurance coverage to fall back on if a loss occurs.

Some large companies are self-insured because they have the resources to withstand losses and their claims experience dem- onstrates that it is cheaper to be self-insured than to pay for insurance coverage.

Insurance companies may be privately owned or operated by the state or federal government.

The government sometimes steps in to provide insurance that is not ordi- narily available from private insurers.

At the state level, the government is involved in providing unemploy-