The authority of the insurance agent 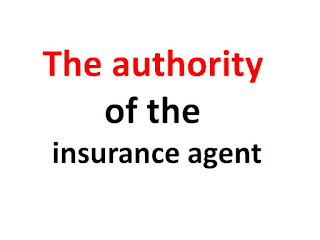 An agency relationship exists when one party (an agent) is authorized to act on behalf of another (a principal).

In the insurance business, the principal is the insurance company and the agent is a person authorized to act on the company’s behalf.

Principals grant certain powers, or authority, to their agents, and when agents act under these powers, their acts are considered to be the acts of the principal.

These acts include making contracts and accepting money.

For example, suppose the applicant tells the agent something very important about the applicant’s insurability.

The agent does not list this infor- mation on the application. According to the law of agency, the applicant is revealing the information to the insurance company through the knowledge of the agent.

There are actually three separate levels of agent authority.

Express authority is the authority specifically given to an agent, either orally or in writing, by the principal.

Written authority is usually provided through an agency agreement that allows the agent to countersign, issue, and deliver policies and provide other customary services on all contracts accepted by the insurer from the agent.

Implied authority is authority given by the insurance company to the agent that is not formally expressed or communicated.

This implied authority allows the agent to perform all of the usual and necessary tasks to sell and ser- vice insurance contracts and to fully exercise the agent’s express authority.

Apparent authority is a doctrine that holds that an agent may have what- ever authority a reasonable person would assume the agent has. In the public’s eye, an agent acting under apparent authority binds the company as fully as under expressed or implied authority.