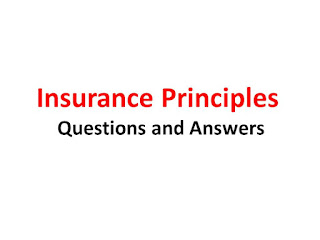 1. Match each word below with its appropriate definition.

2. Which of the following represent pure risks?

A. Terry places a bet on the outcome of a basketball game.

B. Margaret’s dog is temperamental. She’s afraid it will bite a neighbor someday, and she will be held responsible.

3. The law of large numbers

B. states that there must be an adequate spread of risk for insurance to be effective

C. states that the more examples used to develop a statistic, the more reliable the statistic will

C. LaTonya’s son, who would like to inherit the home some day

5. Describe four of the criteria a risk must meet to be insurable.

6. Highpoint Industries has an automatic sprinkler system installed in its office building. This is an example of which risk management method?

7. Benson Pharmaceutical Company decides not to manufacture a new drug after determining that it has serious potential side effects. This is an example of which risk management method?

8. Since she has always been in good health, Donna decides to cancel her health insurance policy. This is an example of which risk management method?

9. Determine the peril involved in each of the following losses.

A. Mr. Reed’s home was destroyed in a fire.

B. Suzanne’s house was damaged in a flood.

10. Veronica forget to lock her front door when she leaves for work. Later that day, a thief enters her apartment and steals her television.

A. What was the peril?

B. What was the hazard?

1- 4 A.; 2B.; 1 C.; 3 D. Risk is the chance or uncertainty of loss. Insurance is a contract or device for transferring the risk of loss from a person, business, or organization to an insurance company that agrees, in exchange for a premium, to pay for losses through an accumulation of premiums. A peril is the cause of loss. A hazard is something that increases the chance of loss.

5. Any four of the following: Insurable interest; pure risk, not speculative; loss must not happen to a large number of insureds at the same time; risk of loss must be definite; loss would cause financial hardship; cost of loss is calculable; cost of insurance covering the risk is affordable; large number of persons with similar potential for loss..

6 .B – A sprinkler system can reduce the severity of fires, but it does not prevent them altogether or reduce the number that occur.

7  .C – By not producing the drug, Benson avoids the risk of being sued by consumers who are injured by the drug.

7. C -By not producing the drug, Benson avoids the risk of being sued by consumers who are injured by the drug.

8. A  – By not carrying health insurance, Donna is retaining the risk of financial loss from unexpected medical expenses.

9. A peril is the cause of loss. In these exercises, the perils are: A. Fire; B. Flood; C. Collision.