What are the exceptions and limitations in property insurance? 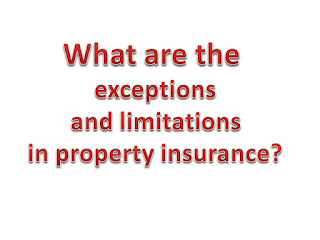 In a named peril policy, any peril that is not specifically listed as covered is automatically excluded.

However, named peril policies also list certain exclusions separately to explain or emphasize perils or property that is excluded from coverage.

In an open peril policy, the exclusions are especially important, because any peril not specifically listed as excluded is insured against.

Exclusions in a policy vary with the type of property or situation the contract is designed to cover.

However, there are five broad categories of exclusions that are commonly found in property policies.

Property insurance policy provisions and policy language underwent changes in recent years to avoid confusion related to concurrent causation. Concurrent causation refers to a situation where two or more perils act concurrently—at the same time or in sequence—to cause a loss. This created significant problems for insurers when one peril was covered by a policy and the other was not.

The issue initially arose when some insurers were challenged to pay earthquake claims under collapse coverage.

At the time, dwelling, homeowners, and commercial property policies included collapse of a building or structure as a peril insured against, whereas earthquake coverage was generally excluded.

When an earthquake struck, claims were filed under the collapse coverage by insureds who did not have earthquake coverage.

The insurers maintained that they never intended to provide earthquake coverage under the peril of collapse.

Some courts concluded otherwise and held for the insured on the grounds that the loss was due to collapse of the building whether earthquake was a concurrent or contributing cause.

To clarify the intent of the policy, insurers removed collapse as a peril insured against and made it an additional coverage.

The wording was changed to specify that collapse coverage only applies when it is caused by certain perils named in the policy, such as fire, weight of contents or people, and the use of defective construction materials.

Losses controllable by the insured:■ Losses that can be controlled or prevented with extra care or effort on the insured’s part are excluded. This encourages the insured to be responsible in the use of the property.

Marring, scratching, and breaking or chipping of fragile objects are all examples of losses that are controllable by the insured.

The insurance company could provide coverage, but the unique nature of the peril requires a substantial increase in the premium the insured would pay.

Extra-hazardous perils are usually excluded from the policy because most insureds would not want or need the coverage.

Insureds who do require the coverage can often obtain it through an endorsement to the policy, for which an extra premium is charged. An example of an extra-hazardous peril is earthquake.

Catastrophic losses:■ Some losses are so broad in their scope that they could bankrupt any company that insured against them. Losses arising from war or nuclear disasters are generally uninsurable because of their catastrophic nature.

For example, a policy covering your personal property would normally exclude your car because there is a separate automobile policy to provide coverage for your vehicle.

Some policies also include limitations that are less sweeping than exclusions.

A limitation may eliminate or reduce coverage but only under certain circumstances or when specified conditions apply.

For example, after a building has been vacant for 60 days, some types of commercial property losses will not be covered at all, while the amount paid for other types of losses will be reduced by 15%.