What is a property insurance agreement? 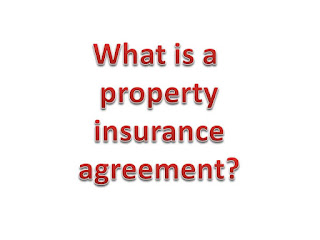 The insuring agreement explains what property is covered and the perils the property is insured against.

Several different coverages may be provided in a single policy.

These coverages, which may also be called extended coverages, coverage extensions, or other coverages, may have reduced or separate limits of liability or require the insured to meet certain policy requirements before they apply.

Policies that list the specific perils or causes of loss insured against under the contract, such as lightning, fire, and windstorm, are called named peril or specified peril policies.

Named peril contracts insure property only against the perils specifically listed in the policy.

An open peril policy insures against all risks of physical loss except those specifically excluded in the policy.

This type of contract is sometimes called all-risk or special coverage.

In addition to specifying the property covered and the perils insured against, the insuring agreement will state whether it covers direct loss, indirect loss, or both.

You are probably most familiar with direct loss.

This is financial loss resulting directly from a loss to property, such as a house being damaged in a windstorm or a valuable piece of jewelry being stolen.

Indirect loss comes as a result, or consequence, of the original loss. For this reason, it is also known as consequential loss.

For instance, suppose a hotel burns down. In the one year required to rebuild, the owner loses over $2 million in room rentals.

This loss of rent would be an indirect, or consequential, loss resulting from the direct loss to the hotel by fire.