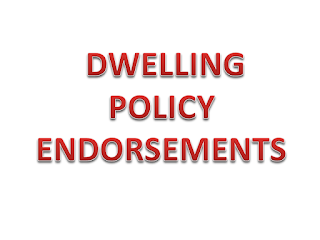 The broad theft coverage endorsement adds coverage for theft of personal property to the dwelling policy.

It may be written for an owner-occupied dwelling or an apartment occupied by a tenant who is the named insured.

The endorsement covers theft, attempted theft and vandalism, and malicious mischief as a result of theft or attempted theft. V&MM is not covered if the dwelling is vacant for more than 60 consecutive days immediately before the loss.

The following property is not covered:

■Property while it is in the mail

■Aircraft and parts, other than model or hobby aircraft

■Property separately described and specifically insured by other insurance

■Property of tenants, roomers, and boarders that are not related to an insured

■Business property of an insured or residence employee

■Property that is in the custody of a laundry, tailor, or cleaner (except for loss by burglary or robbery)

Special limits of liability apply to the following classes of property:

■$200 for money or related property, coins, and precious metals

■$1,500 for securities, manuscripts, and other valuable paper property

■$1,500 for watercraft, including trailers and equipment

■$1,500 for trailers not used with watercraft

■$1,500 for jewelry, watches, furs, and precious and semiprecious stones

The insured is required to notify the police when a theft loss occurs.

2. Personal Liability and Medical Payments to Others

The insured may purchase personal liability and medical payments to others coverage as an endorsement to the dwelling policy or as a separate policy.

These coverages are very similar to those provided in the liability section of the homeowners policy, which will be examined later in the course.

Coverage L—personal liability provides coverage for damages that the insured becomes legally obligated to pay because of an occurrence to which the coverage applies that causes bodily injury or property damage. The insurer will also defend the insured against such claims at its own expense, even if the suit is groundless or fraudulent. The policy limit is $100,000.

Under Coverage M—medical payments to others, the insurer will pay all necessary medical expenses incurred within three years of an accident that causes bodily injury. This coverage applies to injuries sustained while the injured party is:

——on the insured location,

——caused by the activities of the insured, or

—— caused by an animal in the insured’s care.

There is a limit of $1,000 per person under this coverage. The insured does not have to be legally liable for coverage to apply.

Coverage does not apply to any injury sustained by the insured or the insured’s family members.

Personal liability and medical payments to others coverage also includes three additional coverages: claim expenses, first aid to others, and damage to property of others. Losses under these coverages are paid in addition to the limit of liability.

■court costs charged against an insured in any suit the insurer defends;

■premiums on bonds that do not exceed the Coverage L limit and that are required in a suit defended by the insurer;

■reasonable expenses incurred by the insured at the insurer’s request while assisting in the claim investigation or defense, including up to $50 per day for lost earnings; and

Expenses for first aid to others are covered when they are incurred by the insured for bodily injury to others that is covered by the policy.

If the insured causes damage to the property of others, the policy will provide replacement cost coverage of up to $500 per occurrence.

Bodily injury or property damage arising out of the following are excluded under both Coverage L and Coverage M:

■Losses that are expected or intended by the insured

■Transmission of a communicable disease by an insured

■Use, sale, or possession of controlled substances other than the legitimate use of prescription drugs

■Ownership, maintenance, use, loading, or unloading of most types of watercraft, aircraft, or vehicles

Suppose a visitor at the insured’s home steals a bottle of painkillers that were prescribed for the insured while she recovered from surgery.

The visitor dies after she accidentally overdoses on the pills. The visitor’s family members sue the insured for damages.

This loss would be covered under the insured’s personal liability and medical payments coverage because the exclusion for bodily injury arising out of the possession of controlled substances does not apply to the legitimate use of prescription drugs.

Additional exclusions that apply only to Coverage L include liability:

■for damage to property owned by an insured;

■for damage to property rented to, occupied or used by, or in the care of an insured (unless the loss is caused by fire, smoke, or explosion);

■for losses that would be covered under a workers’ compensation or similar law;

■for loss assessments charged against the insured as a member of an association, corporation, or community of property owners;

■assumed under most contracts or agreements; and

■for injury to the insured or any relative or minor who resides in the same household.

Coverage M does not apply to bodily injury:

■to a residence employee that occurs off the insured location and does not arise out of or in the course of work the employee performs for the insured;

■due to any nuclear hazard; or

■to any person other than a residence employee who regularly resides on any part of the insured location.

Other endorsements that may be used with the dwelling policy include:

■automatic increase in insurance: provides an annual increase in the Coverage A amount of 4%, 6%, or 8%; and

The limit of liability that applies at any given time is a percentage of the policy limit based on the value of the partially completed home.

The available policy limit increases as construction of the home progresses.