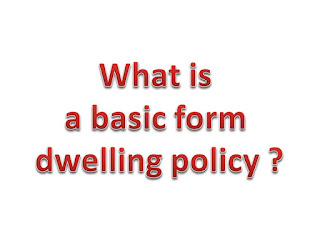 We’ll begin our discussion with the dwelling basic form, which is also known as the DP-1 and DP 00 01.

Although all four coverages are preprinted in the policy form, the insured does not have to purchase each one.

For example, an insured who owns an unfurnished house that she rents to others might choose to purchase only Coverage A—dwelling and Coverage D—fair rental value.

Coverage B—other structures insures buildings on the premises that are separated from the dwelling by a clear space or connected only by a fence, utility line, or similar connection. The building may not be used for commercial, manufacturing, or farming purposes.

However, structures that contain commercial, manufacturing, or farming property that is owned by the insured or a tenant of the dwelling are covered as long as the structure is not used to store gaseous or liquid fuel. Grave markers, including mausoleums, are not covered.

■Books of account, drawings and other paper records, electronic data processing tapes, wires, records, discs, and other software media (does not apply to blank recording or storage media or prerecorded media)

■Motor vehicles, other than motorized equipment used to maintain the premises

■Boats, other than rowboats and canoes

■Water or steam (under the earlier forms, it could be argued that water became the insured’s personal property after it passed through the insured’s water meter; this exclusion makes the intent of the policy clear)

Coverage is also available for property moved from the described location to another residence of the insured within the same state.

The amount of insurance that applies is divided between the described location and the new location, according to the proportion of property at each location. This coverage is called automatic removal. 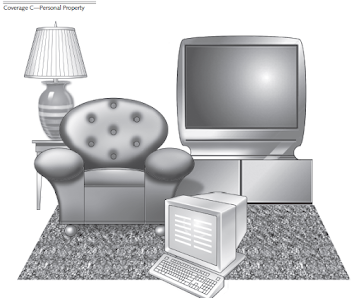 Coverage D—fair rental value is available if a covered property loss to the dwelling or other structure makes the building uninhabitable and the insured cannot collect the rent he would have been able to receive if the loss had not occurred. Twenty percent of the insurance on the dwelling is available for this coverage. If a civil authority prohibits use of the insured property because a covered peril damaged a neighboring location, payments are limited to a maximum of two weeks

The only perils that are automatically covered under the basic form are as follows:

An internal explosion is an explosion that occurs in a covered building or in a building containing covered personal property.

Typical losses covered would include the explosion of a furnace, stove, or hot water heater.

Steam explosions are excluded if the equipment is owned, leased, or operated by the insured.

Although only fire, lightning, and internal explosion are covered automatically, the insured has some additional options with the basic form.

The insured may opt to be covered against a list of additional perils that are sometimes called the extended coverage, or EC, perils.

These perils are already printed in the DP-1 form.

However, no coverage applies unless the insured pays the additional premium and the declarations indicate that the insured has selected the extended coverage perils, which includes the following items. 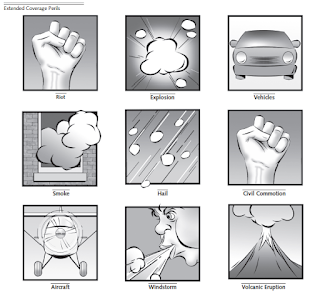 The explosion peril encompasses both internal explosions and other types of explosions, such as an explosion at a neighboring location.

Damage to the interior of a building from windstorm or hail is only covered if wind or hail first makes an opening that allows these elements to enter the building. Awnings, signs, and antennas outside a building are not covered against wind or hail damage.

The vehicles peril does not apply to damage caused by a vehicle owned or operated by the insured or a resident of the household. It also does not include vehicle damage to fences, driveways, and walks.

Smoke damage from fireplaces or from agricultural smudging or industrial operations is not covered.

The smoke peril covers damage caused by puffback—the release of soot, smoke, vapor, or fumes from a furnace, boiler, or similar equipment.

The insured can also obtain coverage for vandalism and malicious mischief (V&MM) by paying an additional premium and indicating this coverage in the declarations.

This coverage must be purchased in conjunction with the extended coverage perils. Vandalism and malicious mischief coverage does not cover:

■damage to glass parts of a building other than glass building blocks;

■losses by theft (does not apply to building damage caused by burglars); or

■vandalism to a building that has been vacant for more than 60 consecutive days.

In addition to insuring against the listed perils, the dwelling basic form provides certain other coverages.

■Debris removal pays for the expense of removing debris resulting from a loss that is covered by the policy.

■Property removed covers loss to property that occurs while the property is being removed to protect it from a covered peril. (This is not the same as automatic removal, which extends personal property coverage to property moved to another residence.) In the basic form, property removed is covered for five days.

■Improvements, alterations, and additions provides coverage for insureds who are tenants for improvements or alterations to the dwelling made at the tenant’s expense. Up to 10% of the Coverage C limit is available for this coverage.

■Worldwide coverage provides 10% of the Coverage C limit for personal property while it is located anywhere in the world. An example is clothing

the insured takes on vacation.

■Rental value provides 20% of the Coverage A limit for loss of fair rental value, payable at 1/12 of the 20% limit for each month the described location is unfit for its normal use.

Other structures and rental value are not really other coverages, since they are considered basic policy coverages. They are listed again in this section to provide additional information about how the coverages apply.

The basic form excludes the following:

■Losses resulting from ordinances or laws that require the insured to test for, monitor, clean up, or otherwise respond to pollutants or that require more elaborate or expensive reconstruction or demolition than was used in the original structure (replacing a dwelling’s regular glass with safety glass is covered)

and subsidence; does not apply to direct loss by fire or explosion resulting from earth movement

■Water damage in general, including flooding, water backing up into a building, and water leaking or seeping from below the ground; also

■The insured’s failure to save and preserve property after a loss, or to protect it from loss

■Destruction, confiscation, or seizure of property by the government or a public authority

The dwelling policy contains many of the property insurance conditions we described in an earlier unit. There are also several conditions concerning how losses will be paid.

■The loss settlement condition states that covered property losses are valued at actual cash value but are not to exceed the amount necessary to repair or replace.

■The our option condition gives the insurer the right to repair or replace damaged property with material or property of like kind and quality within 30 days of receiving the insured’s statement of loss.

■The deductible clause states that only the amount of loss over the deductible will be paid, up to the limit of liability.

■The pair or set condition states that in the case of a loss to an item that is part of a pair or set, the insurance company is not obligated to pay the value of the entire set. The company may either repair or replace part of the set or pay the difference between the actual cash value of the property before and after the loss.

■The loss payment condition states that the loss will be paid within 30 days after reaching an agreement with the insured.

■The recovered property condition states that if the insured or insurer recovers property on which the insurer has made loss payment, the other party must be notified. The insured may have the property returned, in which case the loss payment will be adjusted, or allow the company to have it.