What is a special form dwelling? 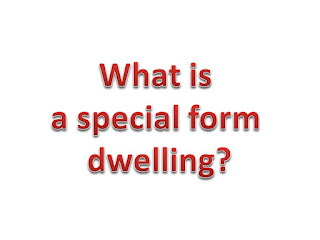 Now that you’re familiar with the DP-1, we’ll study the other dwelling forms. Our discussion will focus primarily on the differences between these forms and the DP-1.

Like the basic form, the broad form (DP-2, DP 00 02) is a named peril policy that lists the perils that dwellings, other structures, and personal property are insured against.

The broad form automatically covers all of the standard and optional perils available on the basic form—fire, lightning, the extended coverage perils, and vandalism and malicious mischief. It also broadens some perils covered under the basic form and adds additional perils:

■Weight of ice, snow, or sleet

■Freezing of plumbing, heating, air conditioning, or automatic fire protective sprinkler systems and household appliances (insured must use reasonable care to maintain heat in the building or shut off the water supply and drain all systems and appliances)

■Sudden and accidental damage from artificially generated electrical current (does not include damage to a tube, transistor, or similar electrical component)

■Accidental discharge of water or steam at the described location from within a plumbing, heating, air conditioning, or automatic fire protective sprinkler system or household appliance

The falling objects peril does not include damage to awnings, fences, outdoor equipment, or outdoor radio and television antennas, including their lead-in wires, masts, and towers. Damage to a building’s interior or its contents is covered only if the falling object first damages the roof or an exterior wall.

The accidental discharge or overflow peril does not include continuous or repeated leakage or seepage, freezing, or damage to the system or appliance itself.

has been vacant for more than 60 consecutive days.

The special form (DP-3, DP 00 03) provides open peril coverage on the dwelling and other structures, insuring against all risks of direct physical loss that are not specifically excluded in the policy. Personal property is covered on a named peril basis—the same perils listed in the DP-2.

Under Coverages A and B, the special form excludes:

■all property, losses, and perils not covered due to limitations of the general exclusions (as described earlier in relation to the basic form) and the insuring agreement;

■any loss involving collapse, other than as provided in the other coverages section;

■freezing of a plumbing, heating, air conditioning, or automatic fire protective sprinkler system or a household appliance, or overflow due to freezing, unless reasonable care was taken to maintain heat in the building or to shut off the water supply and drain the systems and appliances;

■damage by wind, hail, ice, snow, or sleet to outdoor radio and television antennas and aerials, including their lead-in wires, masts, or towers, and damage by these same perils to lawns, trees, shrubs, or plants;

■vandalism, malicious mischief, theft, and attempted theft if the dwelling has been vacant for more than 60 consecutive days at the time of loss;

■constant or repeated seepage or leakage of water or steam over time from a plumbing, heating, air conditioning, or fire protective sprinkler system or from a household appliance;

If a loss that is not otherwise excluded involves water damage from a plumbing, heating, air conditioning, or fire protective sprinkler system or household appliance, the policy covers the loss caused by water and the cost of tearing out and replacing any part of a building necessary to repair the system or appliance. Loss to the system or appliance itself is not covered.

These are covered for the time needed to repair or replace the damaged property or become settled elsewhere in permanent quarters.

If a civil authority prohibits use of the insured property because a covered peril damaged a neighboring location, payments are limited to a maximum of two weeks.

(Note that this coverage can be added to the DP-1 by endorsement.)

The DP-2 and DP-3 include some other coverages that are not contained in the DP-1.

Trees, shrubs, and other plants pays up to 5% of the Coverage A limit for damage to trees, shrubs, plants, or lawns caused by a specified list of perils.

Collapse that results from hidden decay or hidden insect or vermin damage is not covered if the insured knew about the damage before the building collapsed.

The ordinance or law coverage allows payment of up to 10% of the Coverage A limit of liability for the increased cost to repair or rebuild a dwelling or other structure to conform with applicable building and land use codes.

Both the DP-2 and the DP-3 settle losses to personal property at actual cash value. Losses to the dwelling and other structures, however, are paid on a replacement cost basis, with no deduction for depreciation, as long as the insured carries insurance equal to 80% or more of the full replacement cost of the building at the time of the loss.

If the insured does not carry enough insurance to qualify for replacement cost coverage, the insured will be paid the larger of:

■the actual cash value of the loss, or;

■a proportion of the replacement cost.

Of course, the insured can never receive more than the policy limit.

The figure that results is multiplied by the amount of the loss to determine the amount of reimbursement. Here is how it looks as a formula:

Suppose an insured’s home has a replacement value of $100,000. This insured has $60,000 in coverage instead of the $80,000 needed to qualify for replacement cost coverage. The insured has a $16,000 loss. Using the proportional method, reimbursement would be: