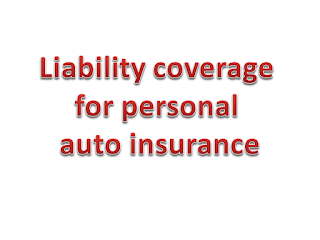 Part A—liability coverage covers damages for bodily injury or property damage that an insured becomes legally responsible for because of an auto accident.

There are several important concepts here.

First, the policy only protects those who are considered insureds. We’ll look at who is an insured under Part A of the policy in a moment.

Second, coverage applies only to damages for which the insured is legally responsible. Finally, the damages must involve bodily injury or property damage and result from an auto accident.

The policy promises to settle or defend any claim or suit asking for such damages and promises to pay any defense costs incurred by the company.

However, the duty to settle or defend ends when the limit of liability has been exhausted. Defense costs are paid in addition to the limit of insurance.

There is no duty to settle or defend claims for BI or PD that are not covered under the policy.

2. Who Is an Insured

Now let’s look at who is considered an insured under Part A of the personal auto policy. Although there are some exceptions we’ll cover later, in general the policy considers the following to be insureds:

Let’s take a closer look at each of these groups.

The named insured, the insured’s spouse, or any family member is an insured for the ownership, maintenance, or use of any auto or trailer. Suppose the named insured’s 16-year-old son borrows a neighbor’s car and causes an accident.

The son is considered an insured for liability coverage under the named insured’s personal auto policy.

Any person using the named insured’s covered auto with the insured’s permission or the reasonable belief that he is entitled to do so is also covered for liability insurance.

The policy also insures any person or organization who is legally responsible for the acts or omissions of anyone insured under Part A of the policy that result in an auto accident involving a covered auto. This is an example of vicarious liability.

Dave is on his way to a business luncheon in his own car when he hits Randall’s car. Because Dave was on company business when the accident occurred, Randall sues Dave and his employer, Rock Oil, for damages.

If Dave were driving a company-owned car when the accident occurred, his personal auto policy would not cover Rock Oil’s liability.

No coverage applies when the organization owns or rents the vehicle involved in the accident.

Like other liability policies, the liability portion of the personal auto policy contains a supplementary payments section.

Amounts paid under this section do not reduce the policy limit. Supplementary payments include:

■premiums on appeal bonds or bonds to release attachments;

■up to $200 per day for loss of earnings because of attendance at hearings or trials at the company’s request; ■ and

■other reasonable expenses incurred by the insured at the company’s request.

There are a number of important exclusions that help define coverage under the liability section of the personal auto policy. Excluded are:

■BI or PD caused intentionally by the insured;

■damage to property owned or being transported by the insured;

■damage to property rented to, used by, or in the care of the insured;

■BI to an insured’s employees (these losses are covered under workers’ compensation);

■liability arising out of an insured’s ownership or operation of a vehicle used as a public or livery conveyance, such as a taxi (this exclusion does not apply to a share-the-expense carpool);

■liability arising while the insured auto is being used in an auto business;

■use of a vehicle without permission (does not apply to family members using covered autos owned by the insured);

■BI or PD for which an insured is covered under a nuclear energy liability policy;

■motorized vehicles with fewer than four wheels or designed for use off public roads (does not apply to nonowned golf carts);

■vehicles other than covered autos that are owned by family members or furnished for their regular use  (does not apply to the named insured); and

The Part A limit of liability is the most the company will pay for all damages resulting from any one auto accident, regardless of the number of insureds, claims filed, vehicles or premiums listed in the declarations, or vehicles involved in the accident.

Liability coverage is provided on a split limits basis.

The limits are usually expressed as a series of three numbers, such as 25/50/25. This means that the policy will pay:

The policy also states that a person cannot collect duplicate payments for a loss that is covered under Part A and another coverage in the personal auto policy or under any underinsured motorists coverage provided by the policy.

An important provision under Part A of the personal auto policy deals with financial responsibility laws.

Almost all states have financial responsibility laws that require each driver to prove that he can pay for bodily injury or property damage liability losses arising out of auto accidents.

A driver normally meets this requirement by purchasing an auto insurance policy with limits of liability that meet the limits required by that state’s law.

This provision states that the insurance company can certify the policy as proof of future financial responsibility.

When it does, the policy will automatically reflect any changes in the state’s financial responsibility laws.

ehicles are usually driven in more than one state, and the personal auto policy provides for such situations.

The out-of-state coverage provision modifies the personal auto policy to meet other states’ financial responsibility requirements and other state laws concerning out-of-state drivers when the covered auto is being driven in that state.

The company’s share is the proportion that its policy limit bears to the total of all applicable limits.

However, any insurance the company provides for a vehicle that is not owned by the insured, including vehicles used as temporary substitute autos, will be considered excess to other insurance.

Suppose the named insured has an accident in her car and is liable for damages of $60,000. She has a personal auto policy with a $50,000 single liability limit and other applicable liability insurance of $25,000.